I am extremely open about my six year old son’s autism.  Part of the reason is I find it is easier.  Also I find that if I’m open about being the parent of a child with autism people can hopefully understand his differences and be supportive.  I I am also open about it in order to support others.  Often when my son’s autism comes up in conversation people will then feel comfortable telling me about their children’s struggles.  We can share resources and support then.  The problem is people say some weird stuff sometimes. Sometimes it’s offensive.  Other times it’s confusing.  I don’t think people usually mean to say something weird but they often don’t have a lot of experience with children who are not neurotypical and don’t know what the right things to say are.  Here’s my rundown of some of the stranger things that I’ve been told.

What does autism look like?  My son looks like everyan almost seven year old boy.  He doesn’t look different than the other kids in his class.  The implication is usually that he doesn’t “act autistic”.  He’s not stimming (usually) and he talks (a lot).  He’s not the stereotype that people think a child with autism will “look” like so they are surprised.  But it really should not be that surprising.

He’s my son.  If he had a broken leg I would take him to the emergency room, then to the doctor, maybe physical therapy.  I would do whatever it took to help it heal properly.  I would do whatever it takes for him to live his best life.   Every parent would.  This isn’t to say that autism is at all like breaking your leg but the same rationale applies.  I do whatever it takes for my son to live his best life with autism.  Because I’m his mom, and until I got asked that question I never thought anything of it, and haven’t since. 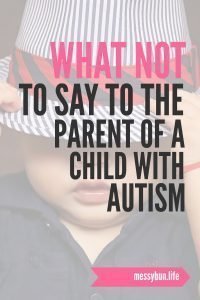 But He Makes Eye Contact.  He Can’t be Autistic.

If Your Child Had Received An Autism Diagnosis Earlier Would You Have Had His Siblings?

This one floored me.  After seeing my initial confused/ shocked reaction she added “or maybe waited a bit?”. My son was diagnosed when my twins were about nine months old so not ideal timing but that was just the diagnosis.  He had always had autism.  The label of autism did not in any way change my child.  The clarity of diagnosis allowed us to better help him, but he was the same.  So this person and I weren’t really talking about him having a diagnosis.  We were talking about him being autistic.  So would I not have more children or wait to have more because my first born was autistic?  No.  For us as a family it did not matter.  For many families I can see how it would change their family planning.  Either way asking someone this is still extraordinarily invasive.

The Messy Bun Life is a parenting blog primarily authored by Laura Epstein. We are here to support all … END_OF_DOCUMENT_TOKEN_TO_BE_REPLACED